Five reasons why we blog 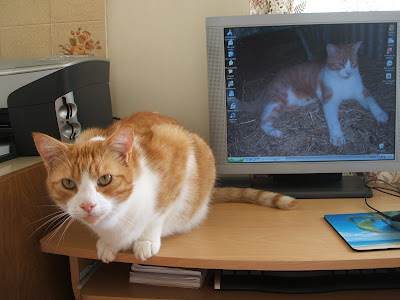 We haf been tagged by owr frends at Forty Paws furr five reasons furr blogging, so we decided to do two each and one between us.
Flynn:
1: I can show off pichurs of my hunting skills.
2:We can read uvver cats blogs and make lots of new frends. (It wuz fanks to Fat Eric that we started in the furrst place.)
Eric:
3:I can show off my Big Mancat fizzeek.
4:We can show uvver cats where we live, and see where they live and learn about them and their country.
Bofe of us:
5: We haf got the best girlcatfrends in the werld and we can see them and talk to them on owr blogs. Fank yoo Grr and Rosie.
We tag Grr,Midnight and Cocoa, Rosie and Cheeto, Rascal, Beezer and Oreo. 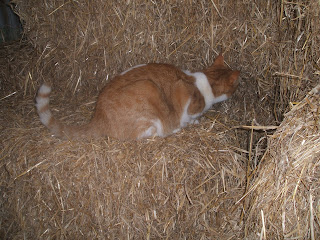 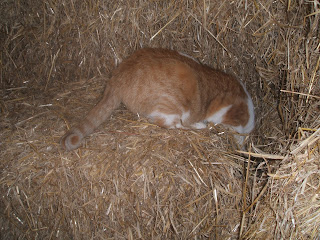 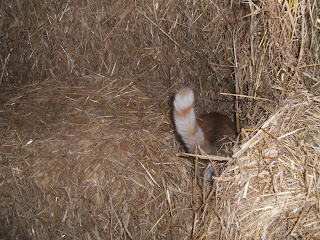 Here I am sitting on a log checking that dad has been doing his work properly.
Well efurryfing looks ok to me. I haf been getting a lot of hassle furrom Flynn cuz he sez he wants to be a mancat too. Well I told him he can put up a mancat pichur just this once, but then he has to leave it to me. He can carry on wiv the "kyoot shots" 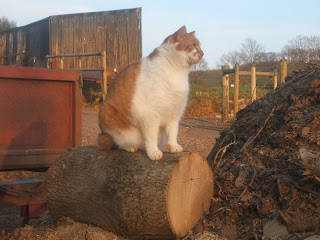 Eric sez I'm not a big mancat and I shouldn't be on Mancat Monday. I asked mum if I could, and she sed of course I can, and that Eric mustn't be mean to me, so heer I am.Do yoo fink I look manly? 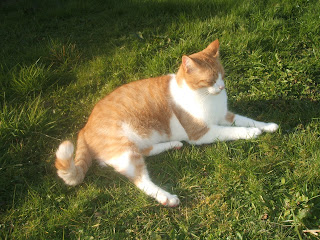 When I wuz little Eric, I yoosed to like gitting in the sink wiv Flynn, and we wud play wiv the water and drink it furrom the tap. 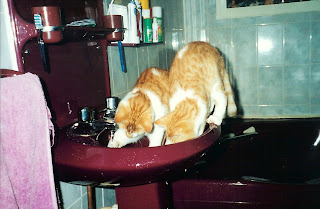 When I got to be Big Eric, the sink must haf got smaller, so then I had to git in the baff and drink. 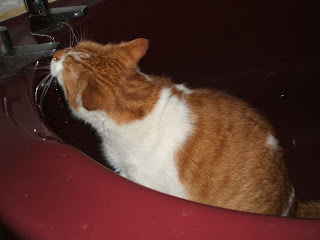 Well furr some reason I haf deesided that I want to sit in the sink again.
Mebbe I am going to turn back into Little Eric. 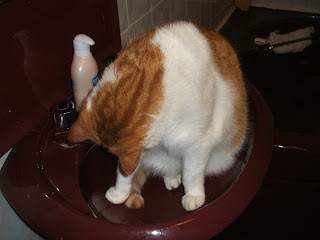 I like drinking furrom here too, trubble is that I block the plug hole wiv my butt and then the sink starts to fill up. Then I git yelled at by mum, cuz when I git on her lap she sez to me,"Oh Eric yer soaking wet!" 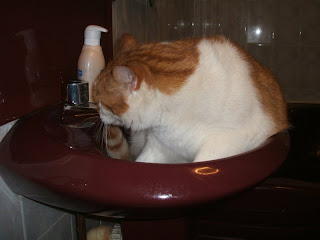 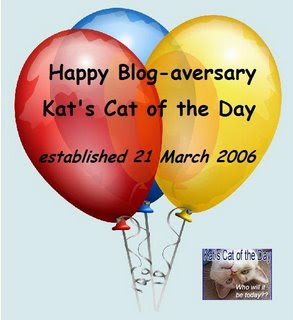 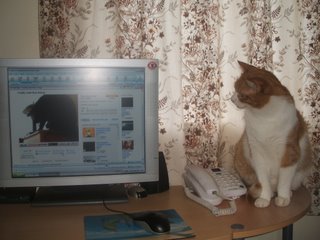 I wuz feeling a bit bored, and I wuz just looking at the compooter, and not paying much attenshun, when suddenly......
Look at that beeyootyfull kitty!! Wow, it's Grr playing wiv string. 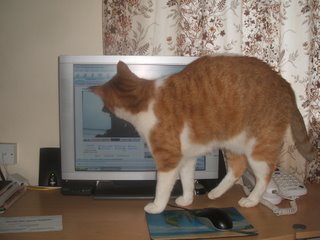 She is the best girlfrend cat enny mancat could want. I just haf to give her a kiss.
Grr I'm so glad I saw yer video. now I can see yoo all the time. 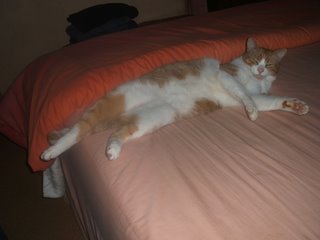 I don't care if you do want to make the bed, I haven't finished sleeping yet. 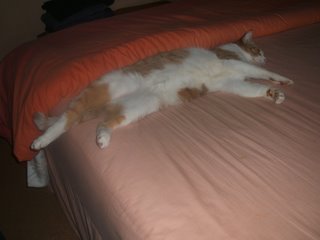 And that's my final word on it. 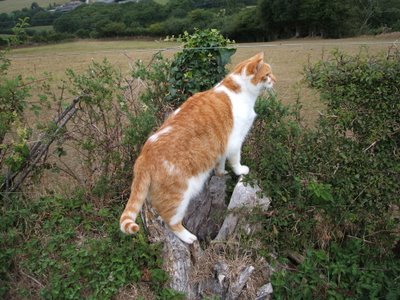 I know I haf put this pichur up once befurr, but I fink it shows off my manliness as I survey my domain. 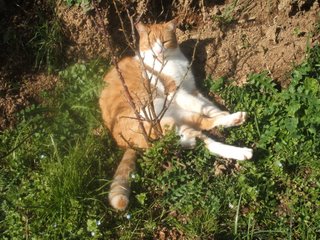 We wuz getting reely bored cuz of all the rain, and we couldn't go for a walk. Well the weather is a lot better now, and the sun is shining. It's even warm enuff furr me to sit here sunbathing. 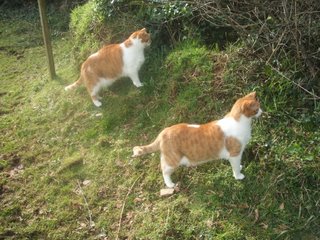 That's enuff of the sunbathing, it's time me and Eric took mum furr a walk. 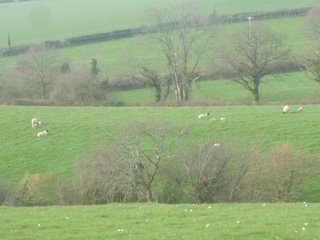 All the sheep in the fields have got theer lambs. We like to watch them running around. 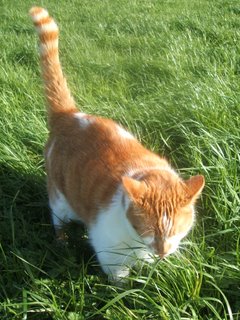 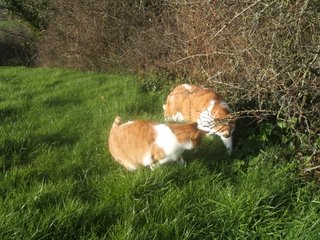 We haf to check efurryfing out. We hafn't been down here furr ages. 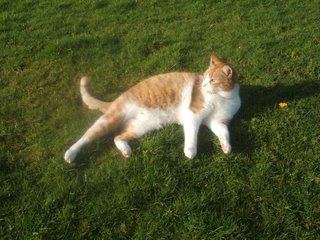 I need a rest and a bit more sunbathing. 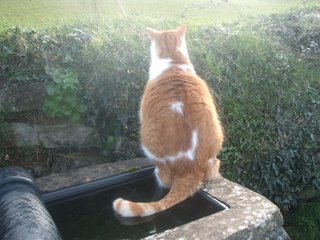 All this walking has made me hot. I need to cool my tail down. 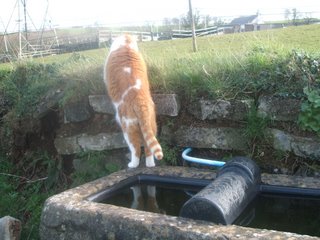 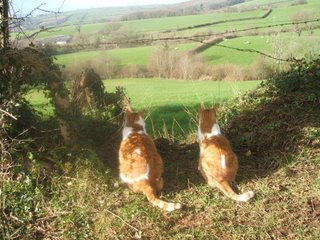 We are on guard duty here. This is the field that the vishus deer go in sumtimes. We haf to make sure fings are safe befurr we go back to our indoors.
We had fun outdoors. It's much better when the sun shines. 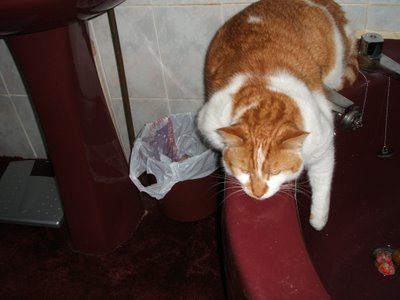 UPDATE:
Guess what. The rain has stopped, and today the sun wuz shining ALL DAY and it wuz lovely and warm. We went out nearly all day. Our dad wuz werking at home and he let us do what we wanted, just checking on us now and again. We layed in the garden most of the time sunbathing, and then mum took us for a long walk. I'm not bored any more.
Efurryday it's raining. I want to go out furr a walk and play and climb trees.
Yesterday morning the sun wuz out and we asked mum to take us furr a walk, and she sed she would as soon as she finished the horses.Guess what. It started raining again befurr she finished. It's not efun ordinary rain, it's so hevvy yoo can't efun see the end of the garden. I'm reely reely BORED!!!! 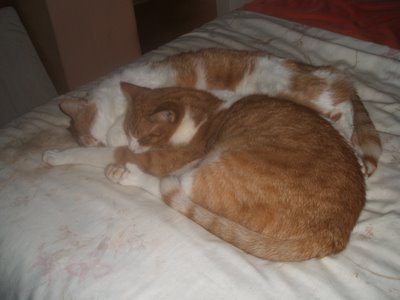 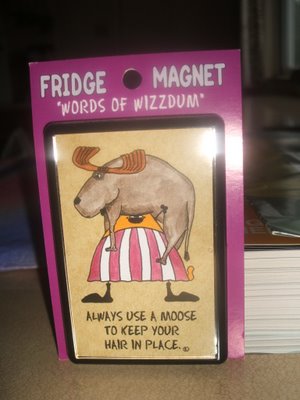 When owr Beans were away the uvver day, mum saw this and told us it is a magnit furr putting on the big box that keeps fings cold. She thought it wuz funny and sed the magnits are called Clive's Cats. Well we fink it looks like a vishus deer, and theer seems to be a conspirrowsee to fool Beans into finking it is harmless so they take them home wiv them, and hoo knows what mite happen once they git them indoors. We feel we haf a duty to warn efurrycat abowt this thrett to owr safety. Be on yer gard in case sumfin like this comes into yer house too.