FLYNN: When we haf our Temtayshuns, I usually have mine on the top of the cat tree, and Eric likes his on the floor. Sumtimes he likes to come up wiv me but that's ok, there's room furr two. 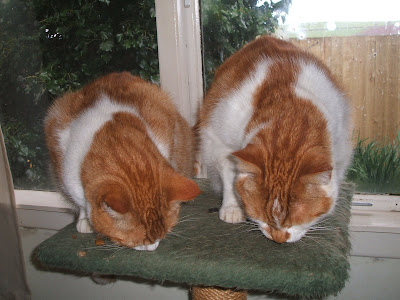 ERIC: I don't fink I could have had as many as you cuz mine are gone already. 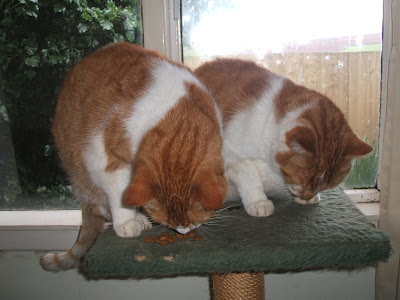 FLYNN: Yes you did, it's cuz you swallow them instead of chewing them like me.
ERIC: No I don't, now go on, let me haf one of yours, pleeeeez.
FLYNN: Yes you do. Mum's always telling you to crunch them cuz it's better furr your teefs to crunch. That's why you got three teefs less than me.
ERIC: Well I don't want to crunch, so there! 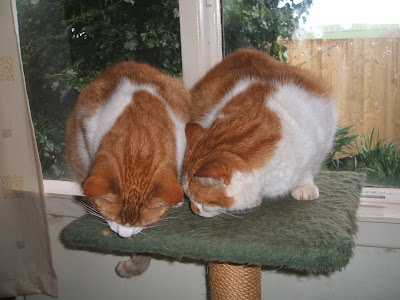 FLYNN: Steady on Eric, that's my last one. You ate all of yours and half of mine. Mum will sneak some more to me when your not around. 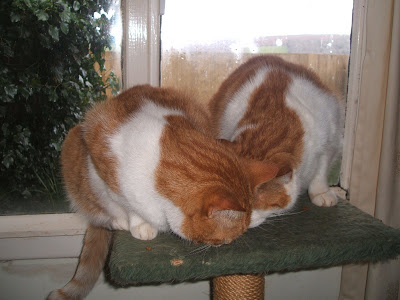 Comments:
Oh, I know how hard it is to share treats. Even when we really really want to be nice and share, it's hard!

I am glad I don't have to share my treats!

You are sharing nicely with Eric, Flynn. This could be another reason why Eric is bigger than you are.

i don't always crunch stuff when i really like it. i just swallow it whole. i don't like cat treats though, or my human just hasn't found any i like. can you suggest any for her. i don't like greenies, or pounce, or some kind in a pouch. i always see you guys enjoying your treats and it makes me want to like them.

my crunchie cookie crumbled pie with cookie dow ice creem. I think yoo got less temptatshuns than Flynn. That was nice of yoo to ask before yoo ate haf of his. -Rosie

I am so glad right now Lego don't have to share my treat!

That must be a very strong cat tree. Enjoy your treats boys.

It's very nice of you to share! Merlin inhales his treats like Eric, whereas I, Dragonheart, chew mine.

This sharing you speak of? This would never happen here!

Dare is always one who eats faster den da ofur. I eats mine den I goes after what Angie hasn't eaten yet.

It's a lot easier to share toys than treats!!!!!!!! Heeheehee
Purrs Mickey

Jake steals our treats too! Mommy usually has to give us our treats separately so he won't take them all (he inhales them too)!

You boys make me laugh out loud!

Momma has to dole out the treats to us while we are in different spots otherwise there might be furrs flying!

When you finally get Greenies over there maybe Eric will start chewing them, hehe, they are kinda big for swallowing whole. ~Queen Snickers

Flynn, you're as sweet as you are handsome! we've got a problem with those darned kittens too. they gobble up the treats, then swipe ours with their sneaky little paws. and people wonder why I whap them...
Grr

One should always make they sure they are not shorted on treats.

I do not chew my temptashuns either! I gets so excited and I forgets to chew and GULP they is gone :( Then Mommie gives me more! :)

Heh heh, nice move, Eric. Flynn, you are a very nice brother. Coco rushes in and grabs all of my treats if she can. Sometimes I like to stare at them for a few moments, anticipating how yummy they are, and if Momma doesn't stand right there, Coco just barges in. She doesn't share.
Your buddy, Jimmy Joe

hehe, you two are so cute on yur cat tree, eatin yur temptayshuns together! You oughta see how it is with alla us Ballicai eatin our temptayshuns atta same time. hehehe! some of us eat faster than othurs, and I think Brainball scarfs the temptayshuns fastur than anykitty but then efurryone tries to steal his so no wondur!

Kittyhugs and purrs from MaoMao!

*giggle*, what an adorable post! You two are good Temptations sharers. Oh, the deliciousness!

Purrs and snuggles from Marilyn.

MEW! Tanks for visiting me!!! You such a gent for sharing!

That tree looks a little too small for you both to be on top of it. Good of you to be sharing treats. While I don't have to sahre anything, I don't particularly like crunchy treats either.

Chewing helps your teef and your digestion too Eric ~ good thing you're both sharing though!
Purrs from the SnowForest family :)

hey! You two sound just like us! Sometimes they are just so good you want to get them to your belly as fast as you can!

Hehe that's why Puddy likes being an only-cat, she doesn't have to share her treats! But sharing is a nice thing to do! :)