Mummmm!!! Eric's got my carrot. He knows it's my faverit. 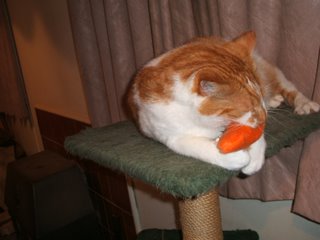 Hehehehe, I nefurr get chance to play wiv this nip carrot. 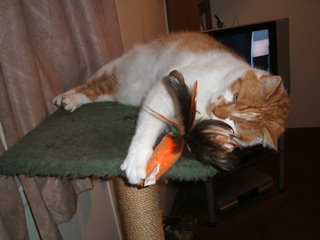 Yeah well now I've got it back again. 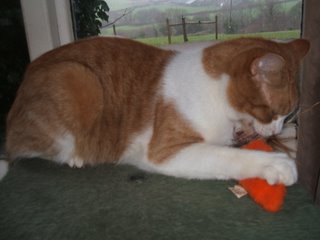 Dis is my most faverit toy in the whole wide werld.
It took me a long time to drool all ofurr it and get the smell just rite. 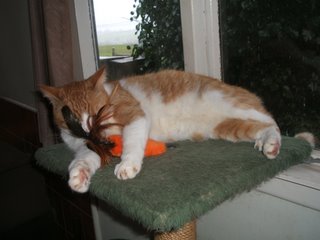 Awww go on Flynn, let me play wiv it. 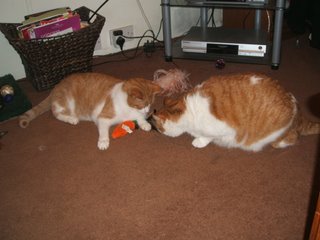 NO!!!! Mine!!! Go and find yer scruffy rat to play wiv.
Scruffy's theer beside the balls that's behind me, and yoo nefurr let me play wiv him. 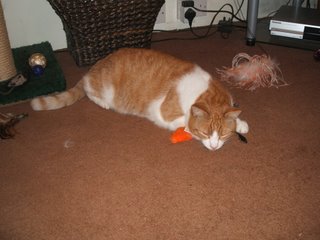 Comments:
Wait just a second....that is a nippy carrot?? With fev-vers!!!! OK, you are going to have to watch out because I'm swimming over there and stealing it!! Or maybe I can just ask really nicely for one....hmmm. You guys really do live a cool life!

Awesum nip carrot. Obviously you both lof it!!
Luf, Us

Wow, yoo did a grate job of taking Flynn's carrot, Eric. Way to go! I've nevur had a "carrot" much less a nippy carrot befour. It luks like an orange mowsie with fev-vurs. I like thowse so I probublie like "carrots" too!

p.s. I've been getting clowsur to that showur thingy my lady uses so I can get used to watur...hopefullie soon I'll be able to swim ovur to see yoo!

I neffur seen a nip carrot afore but it sure looks yummy!

Just like a couple of us cats! We're not the best at sharing!

Toy-stealing.....yes, there's been a rash of that going on in this area too. Blatant day-light thievery, in fact! Sometimes right out from under kitty noses, literally!

KittieKarrots! We want some, too!

Now now boys don't fight over it, take turns. Is this what Mom's say?? Who ever has it get's it, especially with the nip in it. Have fun.

You are a couple of really lucky cats to have such a great life. Me too I guess. It was good to hear from you, but I gotta tell you now that bat on my blog is a bit twisted. I think he's been hanging upside down too long. Talk to you guys again soon.

Wow! Yur mum did a better job than G.T. of breaking her leg. We ist glad u wuz der to take care of her Flynn. Ist important to watch owr beans wen dey not up to par. It's owr yob.
Luf, Us

Those feathers are the cat's pajamas!

Oh-oh, toy stealing. You need to keep an eye on Eric, Flynn. That looks like a great nip carrot.

Oh you guys, carrots are the BEST toys. I have to hide mine. hehehe
Purrrrrrrs,
Bo9ni

That's a cool carrot. The only carrots I know are for bunnies, but seeing how much you like yours, I'll have to ask my human if they sell them over here in Pennsylvania.

That carrot must be very special. Mooommmm! We want one.