The beans are home!!! Oh we are so happy now. Last night we all went to bed togevver, but furrst dad sed he wanted to weigh me to see if my bones had got enny bigger, but guess what! I'm still 21lbs. Mum finks I may haf put on an ounce or two cuz befurr the scales flickered at 21 lbs, but now they are steady, but she sed she duzn't mind that, an Flynn is still 13 lbs.
When we went to bed, I laid on dad's head like I always used to, then I laid on mum's shoulder so she wouldn't feel left out. Flynn got right in an snuggled up to mum, an I heard her keep saying "ouch, ouch" cuz he kept sticking his claws in her tummy cuz he wuz happy. He wuz going reely silly and giving her extra hard headbutts too, an I fink he purred too much too, cuz today mum sed his purr sounds like a horse. She should know better, cuz effurryone knows that horsies say neiiiggghhhhh.
Today we all went furr a walk round the fields togevver, an we wudn't let mum out of our site. Flynn kept walking in furront of her an neerly tripping her up. Then he caught a mouse an he gave it to me in case mum dis- a-peered while he wuz eeting it.
We wuz furry dis-a-poyntid wiv what they brought us home. We asked furr luxury Fancy Feast, Greenies, more fev-vers, an toys that are diffurrent to what we get here. Guess what they got us. Ordinary Fancy Feast, anuvver floofie cat, an wurst of all-Micky Mouse ears that they only thought we wud wear. What an indignity!!!!! Mum sed they cudn't find the rite shops to buy what we wanted, but she sed when they were on the way to the airport, they passed a Wal-Mart, so next time she will know where to go.
We hafn't told the beans yet about all the fun we had while they were away. We were effurr so bizzy. Furrst of all we went an visited Abby in Flo-ree-da. We thought about Sir-Prizing them in Orlando, but thought we may get in trubble so didn't do that. Ennyway we's herd that mice live there that are bigger than us!! Then Grr, Midnight and Cocoa came offurr several times to visit, an we visited them too. Grr and Flynn kept going off on walks togevver. Flynn sed he wuz taking her too see all the best mice and fev-vers. Then Fat Eric invited us up. Sanjee and all the uvvers furrom HOT(m)BC had come ofurr to see us, so we all went togevver to see Eric, and he showed us the sights of London, an we went on the Millenium Wheel an had Niptinis and Tem-Tay-Shuns. It was a bit skeery cuz the wheel went efurr so high in the air. Beau Beau and Angie came an visited us. She is so dainty an has the biggest floofiest tail I haf efurr seen.Then we went an saw Rosie and Cheeto,Beau and Ariel. After that Derby came to see us, then Smeagol and Strider, Gemini and Chey, then Tilly and Toby, Brandi and Casper. The beans sed we looked tired out, an sed "How can yoo get that tired in the garij?" We just looked at each uvver an smiled.
We haf lots of pichurs to put on, but bad blogger wouldn't let us do enny. We hope we can tomorrow. It's great to be back!!!!!

Guess what!!! We's teleported into the house while the beans are on theer holly days in Mericky an we's managed to turn the compooter on . We don't know how to download any pichurs, so we will just say hello to all our poodin frends, an we will see yoo all in anuvver week. We's had fun wiv yoo all teleporting ofurr to see us an we's had fun visiting wiv yoo. See yoo soon.

I am so sad. The beans are going to Mericky an leaving us locked in the garij. Haf yoo efurr herd ennyfing so krool? Dad stood on the bafroom scales to way the big black box that thay haf put theer clothes in, so I sat on them so he cud way me an then I cud go wiv them. Yoo can see my face is reely sad, I just don't know what I am going to do. 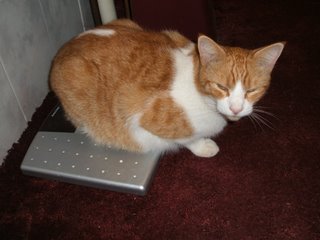 Yep, it's not too gud heer at the moment. Flynn tried to way himself, an I'm trying to hide unner the hej so thay can't find me to lock me up. 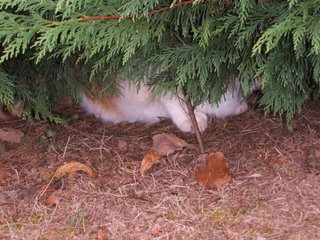 I'm so sad I just don't know what I'm doing enny more. I efun tried to get in Flynn's new bed which wuz part of the purrize from Grr Midnight an Cocoa, an it's a bit small furr me. 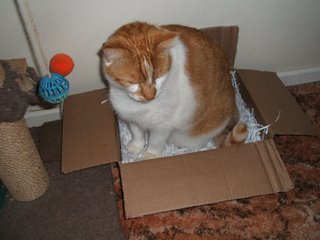 Eric! Did I hear yoo menshun Grr? She sed she is coming to visit me. Maybe fings aren't so bad after all. And Fat Eric has invited us up to visit him in London while the beans are away.Oh I do feel a bit better now. Maybe I'll just scat these noospaypers around a bit.If enny uvver poodins want to visit us, we haf loads of Tem-tay-shuns an Stinky Goodnees we can share. 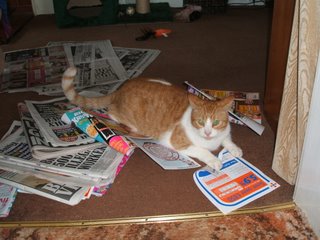 Our mum sed thay will be home sumtime on the 30th. but thay may be jet lagged. (Wot's that mean?) so she may not be able to start the compooter furr us until November 1st. We told her that's too long to not be able to talk to our frends, but she just sed ,sorry but I can't do it enny kwikker.
So we will miss yoo all, but we will be back as soon as we are freed.

Our mum saw this pichur in the noospayper today. It makes some of us big poodins look small an streamlined!! 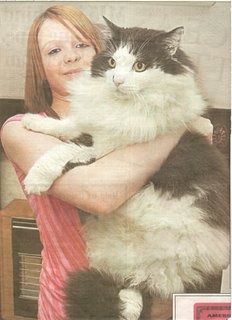 We don't know if the riting will biggify enuff to read, so he is cawled Timmy an he ways 28 lbs.!!! Just look at his hed, it's as big as the girl's!!!
He has to sleep in a woofie baskit, an he's got a woofie kennel. Wot's that abowt? Poodins sleep on the bed.
It sez he only has 1 can of Stinky goodness a day, an he's always been a big boy.He's furry actif an climbs trees an chases the birdies.

Note: The pichur will biggify, but the writing won't.