Flynn: Come on mum, give Eric a shout. I'm waiting to go out. 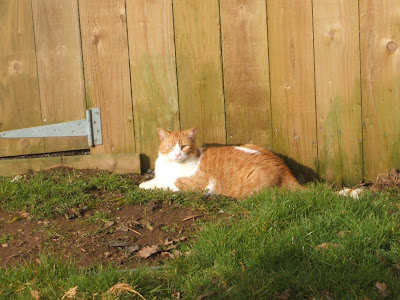 Eric: Won't be a minute, I'm just checking this wheelbarrow out. 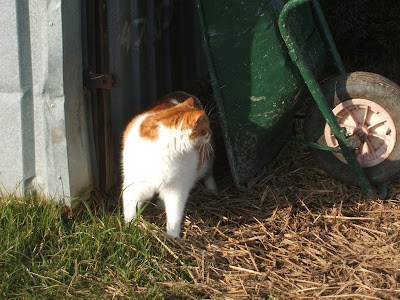 Flynn: Stop messing around Eric, we've got mousies to hunt. 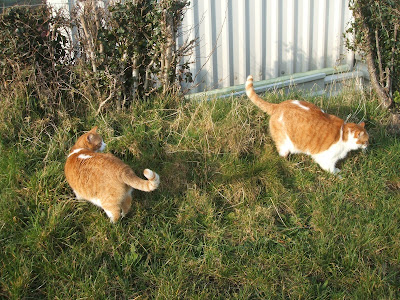 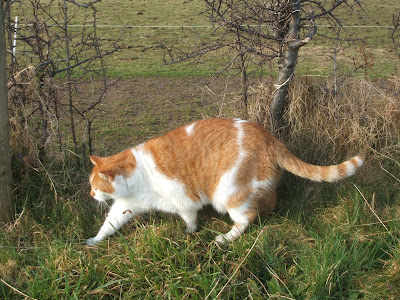 Do you think there are any here Flynn? 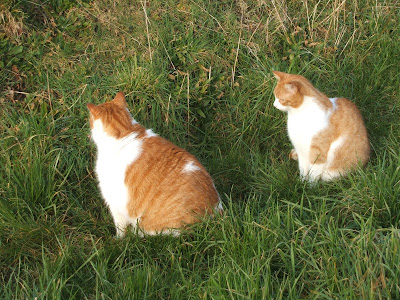 Oh drat! There she is with the flashy box again. 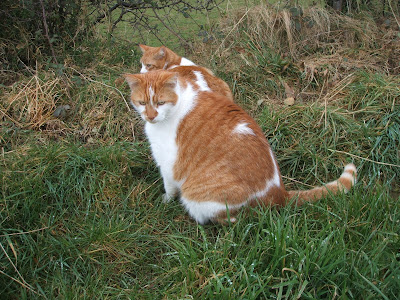 Flynn: Just ignore it Eric, I think there is a mousie here. 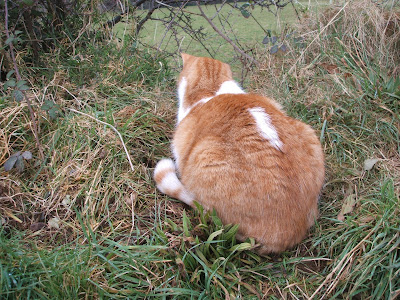 Flynn: Yikes! What was that? 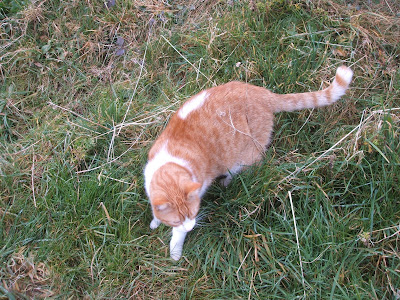 Flynn: Oh! It was Mr. Fezzunt. He made me jump and now the mousie has gone. 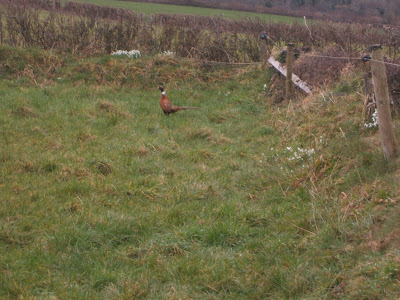 Flynn: I was not scared! If I was scared I would have floofed up all over, not just my tail. Well maybe my tail was a little bit scared. I'm going home! 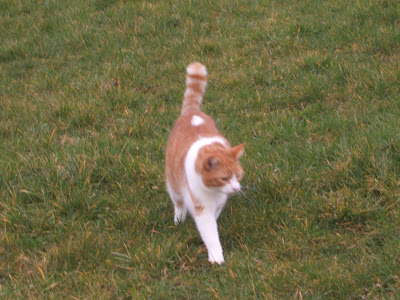 Happy Monday to both you mighty man cat hunters!

Why didn't you catch the pheasant?

Wow! Mr. Pheasant is quite large isn't he?

Flynn it's OK to be scared especially with a bird that size!=^Y^=the Cat Street Boyz

I would have got poofy-tail too!

We think your tail went poofy so that it would scare Mr. Fezzunt away! We don't think you were scared at all!

Hahaha! I fink I wud haf been secretly scared too.

Oh cool! We have never seen a Fezzunt before!!

Wow, cool...I've never seen one of those before!!

fezzunt. we thinks you're 'posed to put it unner a glass and then eat it

Yeah...you totally would've fuzzed up all over, tail fuzzing is totally not a sign of fear...

I hope your tail un-floofs and gets small again. We had a friend-cat who got scared and his tail never went back un-floofy again. I'm sure you'll find the mouse again.
--Jasper

Oh darn it! That fezzunt ruined your hunt!

Ha ha! You wasn't scared, only your tail was and that doesn't count!

Mitzi says she would like to live on your farm with you because she is a great mouse hunter! She brings them in the house and drops them in the waste basket! Can you believe that?!

A Fezzunt??? No wonder your tail got floofy!!!!

I would have been floofed all over.


Please visit me at my new blog...

Yoo know what, we wud has been scairt too!

Whut an advenchure! I felt like I wuz rite thare with ya. Hay, I put up sum pitchurs of my vet visit. Thay are kinda weerd. I got toona tonite too so I feel bedder.

I can't believe you let Mr. Fezzunt scare you!

What a big bird! It would sure scare me!! Lots and lots!

Nice sequence of photos and commentary.

Flynn and Eric, you two are beautiful boys. I've been away for a while. It is nice to get back to see you both.

You two look so cute out in the yard. I have a question, do you ever run out of the yard? I am sending you a whole bunch of purrs, happy Monday also.

Oh Boys, mommy and Admiral must not have known you then.
XXXX