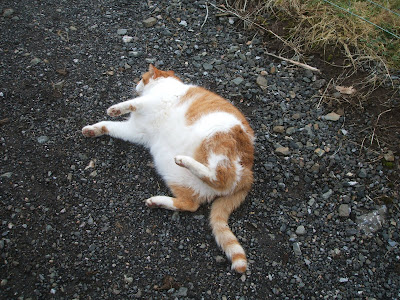 When we go for walks, I always have to come here on the dirt and roll. Mum sez 'Eric, why do you always roll in the dirt when we come back?' I don't answer her cuz I don't know why I do it, it just feels good.

Comments:
Watch out! My human is coming to rub that kitty belleh!

My Momma gets mad 'cause I do the same thing!! She REALLY didn't like it whenI rolled in the fresh pile of red dirt! Heehee!!!
::purrs::
~Kiara (Meeko, too!)

Your tummy is adorable!

I'll bet that dirt feels good! gets to the itchy places!

Oh rolling in dirt feels so good. When we go out that is what we love to do to. We will go for a walk and roll in the gutters on the street. Your belly looks really big and fluffy at this angle.
-Patches and Nemo

I like rolling in the middle of the footpath outside, I finks cause there is a lot of gravel stuff on it.

Ginger and gravel is the perfect mix!

Whenevery I manage to sneak out, that is one of the first things I do. It feels so good to roll in the dirt. You have a very snorgley tummy.

Yeah, a little dirt in the furs does feel good....

'cause it didn't itch on the way there...

There's nothing like rolling in a bit of dirt. I sometimes come home covered in dust hehe!

Mum is trying to pet your belly through the computer... she says if the grass were green here, she'd be out rolling in it like the horsies!

There's nothing better than rolling in the dirt!

Dirt rolling does feel amazing!!!! I can't wait to get some out of doors time.

My mom used to say the same thing. Humans should try it. Then they'd understand.

There is absolutely nothing like a good dirt bath!!!! Enjoy, Eric!

Eric, I think you do it to unwind, I sure do like your colors.

We gave you an award today. Stop by our blog to claim it.
-Patches and Nemo

We bet rolling around in that dirt feels so good to your back!

Thanks so much for the purrs for Cal! We appreciate them so very much!

And if it feels good, just do it!

Whoa, Eric...that could qualify as a "Widebody Wednesday" picture!