When we did the meme about how we got our names, Toby furrom The Tower Hill Mob sed his dad wuz wondering how Kitty Yumbum got her name, so we decided to do a post about her. The pikchurs aren't furry good cuz they's old photos, and mum sez it looks like there's fluff in the scanner. (Probly our furrs cuz we sit on it sumtimes.) 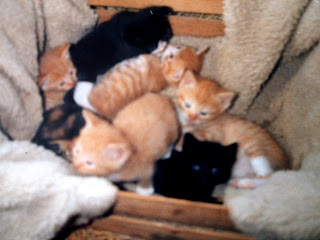 When our dad's mum died she had 9 poodins, so our Beans adoptid them and they came to live with them and their kitty called Jelly Bean. There wuz two ladycats who nefurr had there lady gardenectomies, so mum took them to the V E T to git it done.He told her that he thought one of them wuz going to haf kittens so she left one(Auntie Cat) to git seen to, and brought the uvver one (Mother Puss) home.About two weeks later Mother Puss had seven kittens. When they wuz old enuff homes were found furr six of them, but no-one wanted the last one. Mum sed that's ok, one more won't make any diffrunts, we're keeping her.She's not 100% sure but she finks she's the baby kitty above the black kitty wiv the bloo eyes.She nefurr reely had a proper name to start. Mum used to call her KitKat or BabyKit at furrst then furr some reason she started calling her Baby Yumbum but she duzn't reely know why. She wuz a furry nervous kitty and would only go to mum. She liked to git up on her shoulder and sit there. Mum said she wuz her bestest little girl. 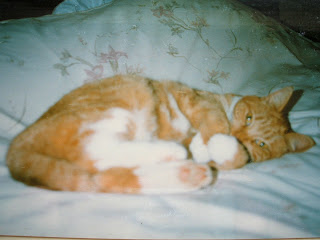 As she got older her name changed furrom Baby Yumbum to Kitty Yumbum. Dad allus called her The Tyke cuz he sed she wuz miserable cuz she wouldn't let him pet her, but she wuzn't miserable reely, mum finks she wuz more shy than nervous.
Over the years all her brofurrs and sisfurrs went to the Bridge with the last one going in the beginning of 2000. She wuz furry sad and wouldn't eat much. She just moped around and didn't purr much to mum. Mum sed to dad "We're going to haf to git anuvver poodin to keep her company" Dad thought that if they got one, when Kit went to the Bridge, then the new poodin would be lonely. He said there wuz kittens at his furrends farm, and he thought they should git two.They went up and chose us. We wuz skeered at furrst cuz we wuz only five and a half weeks old, and we didn't know where our mum wuz. Then we saw this old ladycat and we said to each uvver "Look we got a new mum" and we ran ofurr to her. She ran away furrom us! We kept following her and she kept running and hissing. I (Eric) said to her, "Yoo WILL be my furrend" and efurrywhere she went, I followed. She kept gitting up on the Beans bed where we couldn't reach her. I kept on trying then eventually I managed to scrabble up there with her. She wuzn't happy, but I snuggled up beside her. Flynn wuz a bit skeered of her and didn't git so close.We kept on following her efurrywhere and in the end she said that maybe we weren't so bad and then we all started snuggling together.
When we started going furr walks in the feelds, she would allus follow us. Mum sez befurr we came along she nefurr went out of the garden. If we went wivout her she would meow at the top of her voice cuz she didn't know where we were.
We had just ofurr two happy years wiv her. Mum sez if we hadn't come to keep her company she duzn't fink she would haf lived furr anuvver two munfs after her brofurr went to the Bridge.We miss our ladycat. 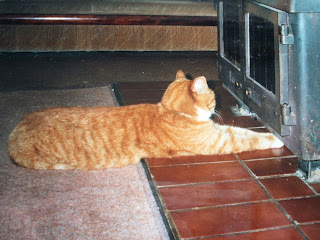 This wuz her most faverit place in the winter. She liked to git her feet right in under the woodburner to keep them warm.
Yoo can see some more pikchurs of her here.
KITTY YUMBUM
3rd APRIL 1987 - 23rd JULY 2002

Comments:
Wow that is a great story indeed!
Yes it is true I am very tiny. I only weigh about 5 pounds because I am a little bit sick and very old. I am glad I can come and wander around your nice meadow and watch you catch mice:) That makes me happy:)
Love Miss Peach

Oh boys, I liked that story about kitty yumbum (awesome name). YOu are right about you boys keeping her going. My mums mum was sick for 10 years, but she hung on to see that the grandkids grew up and were ok. You are good boys for making her love you!!

That was a wonderful story. Kitty Yumbum sounds as if she was a lovely cat and I am glad you had time with her!

My lovely giner sychic boys. Great minds think alike. I have changed my post to swimming costumes optional as you boys would like to go nudie rudie.

Thanks ok = when a boys in peak physical condition you should strut your stuff on the beach.

I love the phot of kitty yumbum with her feet under the woodburner. She must have had a roasty toasty face sitting that close.

Have a nice day out mousing.

What a wonderful story. :) It sounds like Kitty YumBum was a very special cat. :)

We are so happy to learn about Kitty YumBum. We are so glad you two are with your mom now.

She sounds like a very special cat indeed. Its wonderful that you two got to know her.

What a wonderful story! Kitty Yumbum was certainly a sweet kitty.
When Grandma had the big house in Maine, the kitties used to crawl under the woodstove to stay warm, so we think the idea of toasting toes is a good one.
Thanks again for sharing about another Gorgeous Ginger!

I loved the story about Kitty YumBum! And what a cute photo of her warming her little paws under the woodstove. I think you two boys really added some excitement and fun to her last two years.

Kitty Yumbum was a wonderful cat. I have always liked her named! And you were lucky to find such a nice mentor and a wonderful home.

Ohhhhhhh! I love this post about Kitty YumBum! She seemed like a very nice cat. I really liked seeing the pictures of you two guys when you were young too.

The picture of Kitty YumBum warming her toesies made my Mum go Ahhhhh! Especially because she looks alot like me, although I am rather, ummmm, more fluffy : )

that wuz a furry sweet story. an guess what? I do that 'zact same thing with my paws unner the big hot box that's 'tached ta the wall!
purrs
Grr

Oh, that was very loving of your ma and pa to take in the 10 + 1 poodins. My brother Jake keeps on trying curl up with Cookie and Cooke says, "Hissssssss, go away you little ginger kitten. I only cuddle with Tyler." So my mom was thrilled to wake up this morning at 3 am to find Tyler, Cookie, Jake and Sophie all in one cat ball at the foot of the bed. That didn't last long though, at 5 am Cookie was back to hissing and a complaining at the mere sight of Jake, Sophie or Kali. Girls...they can be so argumentative.

what a sweet story. fanks so much fur tellin' us about her...

That is a lovely story about Kitty Yum Bum, I am glad she got to be friends with you two.

Aww thats a greats story and wonderful lady kitty who you helped lives for a few more years!!

I wish I would have known her. She looks like she would have been a very nice kittycat.

kitty yum bum looked like a byootiful cat. i liked reedin all abowt her.
luv--jh

My Catness what a story! I sure love stories fellows and learning about your YumBum was supurr. I wish I would have had a new Mum when I came to my new home. Hey look here comes YumBum. *Timmy goes up and asks if he can be here kitten and she licks his head all over*
Angel Timmy Tomcat

I loved every word about Miss Yumbum and how she came to you...what her story was and how Eric and Flynn became her furriends. So glad I came her to learn about her And more about the boys Loved the pictures too. XX