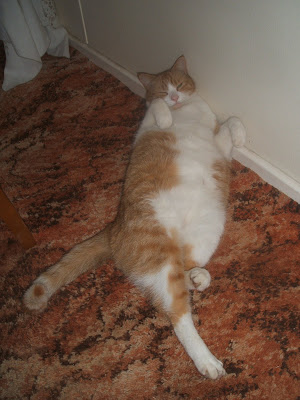 Mum and Eric sez this pichur would do furr Widebody wenzday as well.
Not Fair!! I know I haf put on 1lb, but I fink it is just a bad angull. Eric sez to tell efurrycat that when we wuz wayed the uvver day, he had lost 1lb. I fink that he must haf given it to me when I wuz asleep. Now he is only 6lbs hevvier than me instead of 8lbs. He is being insuffrabull about it.

Comments:
Flynn, I think you are right! Eric gaved you one of his pounds. But it looks good on you, so the joke is on him!

yu look healthy to us. eric cood be worried that yu might take ofer his man cat position in the house.

Yup,he gave it to you my friend! Mommy is attracted to big kitties! That's why I keep myself at a steady 16 pounds! She says you look great and will teleport over so she can give you tummy rubs.

Omigoodness! That's a BIG belly. But I fink maybe it'z juz the angle. But Flynn, you still look furry good!

'sok Flynn, I bet you'll run off the 'winter weight' once you get out a bit more and keep track of all the goings on around your farm.
---Beezer
who really needs to get to the gym more often

You look very happy to us, and very handsome!

I agree Flynn, it is just a bad camera angle, you are a very handsome cat indeed!

Here's what I have to say as a single (spayed) female cat, AAAIIIEEE!
Lotsa purrs,
Parker

Flynn.... you are floofy, but floofy is good. You must always be prepared for the future. There might be more food issues and they we could possibly starve to death... you will last a lot longer, being so prepared.