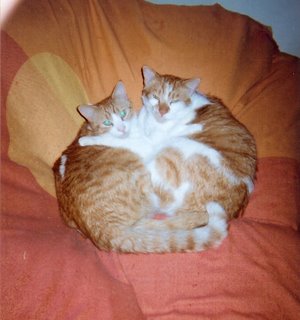 Ok, ok we know it's cheeting, but don't yoo fink we look rather wide between the two of us? 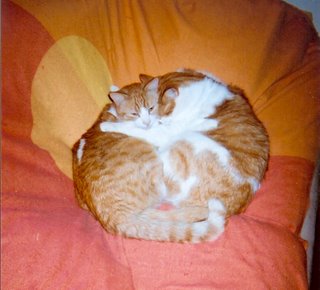 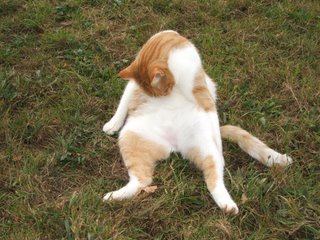 Mum sez I am getting a little podgy tummy, but I fink it is just the way I am sitting. 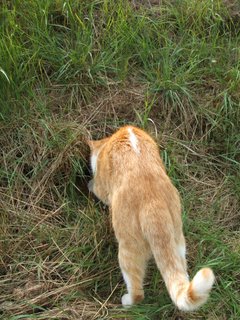 Efurry day we haf to check out all the holes in the feelds to see if theer is enny one home. This is a bunny's hole, but I can't see him. 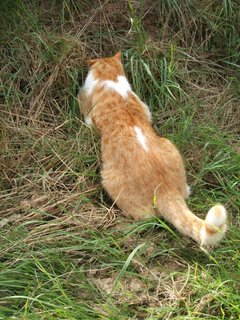 I'll just put my arm down an see if I can feel ennyfing.........
Nope, no-one at home. I wunder if Eric is haffing better luck. 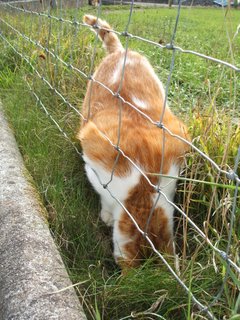 Theer's a ratty livs in this hole. He goes in the horsie stables an steals theer food and takes it down heer. Don't fink he's home either. 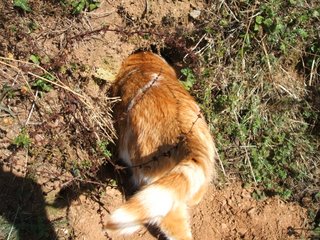 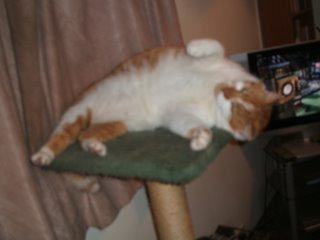 This is my wide boddy pichur, but I fink it just shows how luvly an cuddly I am.
I hav a little kun-fesh-unn to make - I'm lonely. Yoo all may haf notissed that Flynn an Grr haf been bizzy making eyes at each uvver, an thay are always visiting each uvver. It's fun when I see Midnight an Cocoa too, but furry often I'm the odd one out. I haf notissed that lots of uvver kitties haf been haffing romances an flirting an such, like, Sammy an Abby, Miles an Sanjee, Mr. Hendrix an Brandi, an now I see KC an Jack are too. An I expect theer are lots of uvver kitties out theer too that I hafn't menshunned.
I feel a bit embarrist saying this, but if theer is enny kitty owt theer looking furr a big soft cuddly man, well *blush* I wud be furry pleezed to visit yoo.I am furry laid back and not furry affletick, but I do haf my moments when I run rownd the room at 100 miles an hour, an I am ex-sep-shun-lee good at caching grasshoppers. Flynn caches mice furr me wich I wud willinglee sheer, an also we haf Tem-tay-shuns an Nip heer too. If theer is enny lonely lady kitty out theer, then maybe I'm yer man. 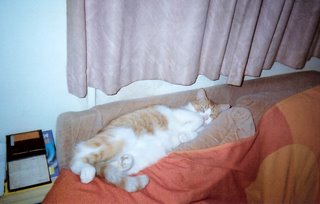 Take that flashy fing away. I'm trying to sleep. 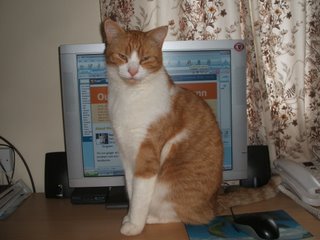 Grr put her bee-yoo-tee-full pichur up furr me, so this one is furr yoo my luvly Grr. Mum cawls me her little hansum man, an *blush* I wud like to be yer hansum man too. 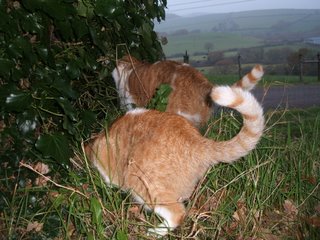 We been keep going back an checking on that tree, an yesterday we herd more noises, so we went an in-vesty-gatid again.Success!!! 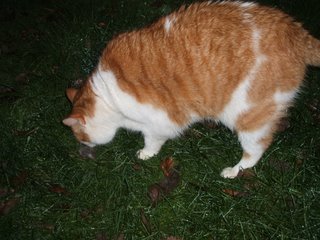 There was a mousie in theer. Mum finks thay may haf made a nest in the tree to live in. I haf to be troofull. It looks like I got the mousie, but reely it wuz Flynn, an he gave it to me to eat. It wuz lucky we got it then cuz it wuz getting dark an mum had told us we had to go in. The tree is a big oak tree that grows owtside our window, an it is cuvvered in ivy, an the birdies like it, so we can sit in the window an watch the live fev-vers efun when we can't go outdoors. 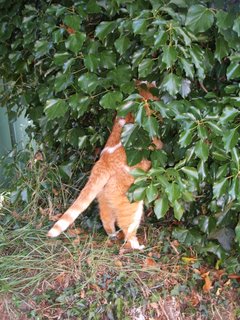 I just know I heard sumfing move, but I don't know what it was. I'll just put my head in an haf a good look round. 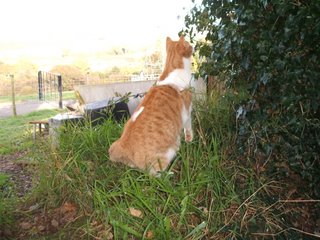 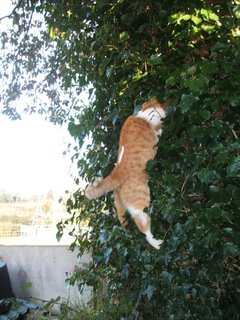 No good, I need to haf a better look.
We bofe looked an looked but cudn't find ennyfing, but we will be back to look again. We don't give up. 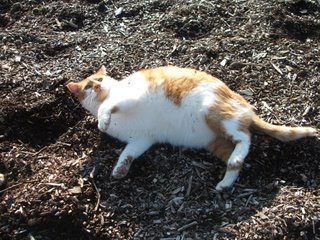 I wuz reeding Rocky the Guttercat's blog the uvver day an I saw Wenzdays wuz cawled Wideboddy Wenzday. Well I am furry proud of my 21 lbs efun if my mum is not, an I sed to myself "Eric yoo must do this!" So here is my wide boddy. Mum wuz furry rood bowt this pichur. She sez in sum pichurs I do look big- boned, but in this one she finks I look like a porker, what efurr that is. 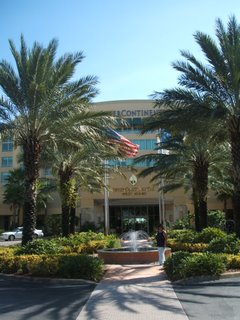 This is the hotel in Miami that our beans stayed in the night befurr thay came home. That's our mum stood by the fountain. 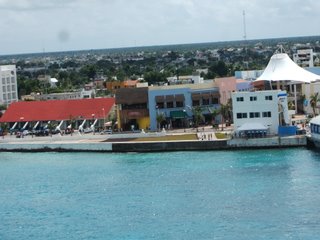 This is Cozumel. The brown an white bill-ding between the white one wiv an umber-ella ofurr it ant the one wiv a browny sort of roof is Senor Frog's. They haf been to Senor Frog's in Acupulco befurr, so sed thay had to go to this one. Dad sed mum had lots of Margy-greeters an it made her legs go wobbly, but thay sed it is fun in theer. 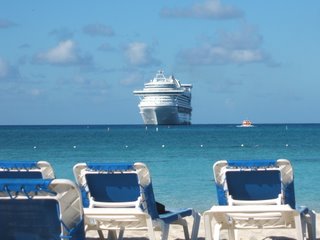 This is the ship thay sailed on, an mum wuz laying in a beech lownjer on Eleuthera Island in the Bahamas. (Thanks mum furr spelling that furr me) 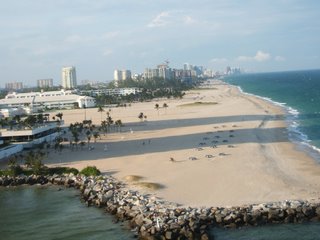 This is the beach at Fort Law-Dee-Dale when thay started theer cruise. 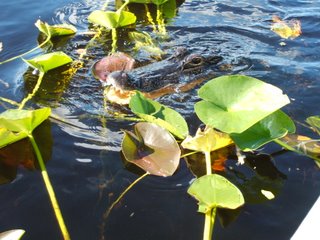 Thay went to the Effurr-Glades an saw Allee-Gayters. Mum sed yoo cud put yer hand owt an touch them cuz thay wuz so close, but it wud not be a gud ideer. 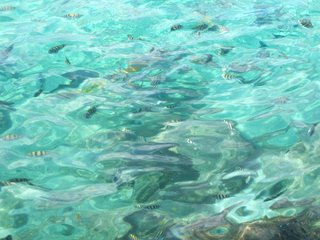 In this water is live fishies!!! We sed why didn't yoo bring the live fishies home furr us insted of those stoopid mousie eers? 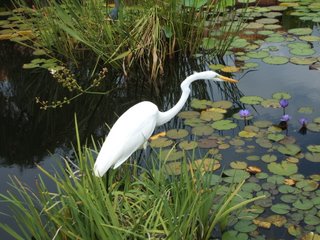 An thay seed live fev-vers too, but didn't bring them home either. An also we haf to say that efun though thay went an seen the big mousie an his frends, where's the pichurs of the beans weering mousie eers???

At last, a few pichurs 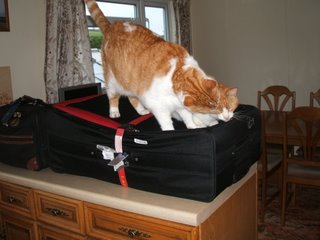 At last blogger has let us put some pichurs on. We hope we can do sum more tomorrow too.
This is one of the nasty boxes the beans put theer stuff in when they left us. Befurr they cud unpack it, we climbed on it an rolled all ofurr it to put our stink on it.We got loads of furrs on it an they won't want to go away again in a hurry. 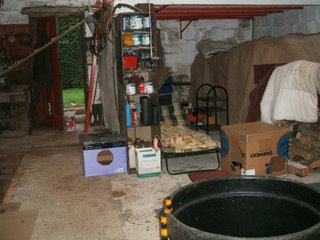 This is the garij we had to live in. At the back yoo can see the door is open. That is acos they took our outdoor run away furrom the bedroom window an put it against the garij door so we cud get sum fresh air. 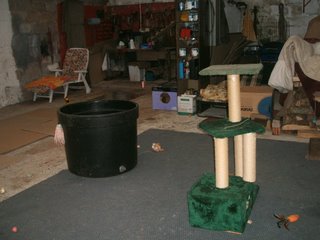 They washed all the floor and put a carpet down an then all our toys an skraching posts came out. They efun gave us a garden lounger each. The two ladies that came to feed us an play wiv us told the beans we were more settled this time an that we didn't seem to miss them. Mum sed that wuz good but she hoped we missed them a little bit.We didn't tell enny buddy that we had lots of visitors and that we did lots of visiting, an I don't fink she cud tell we had the compooter on one day. 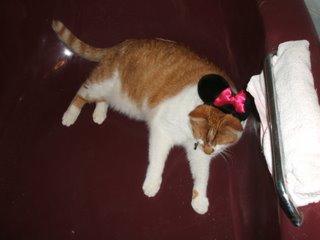 Of all the good fings they cud haf brought us home, they had to bring mousie ears!!!I wouldn't keep them on an kept pushing them back afurr mum cud take my pichur. I am laid in the baf, and after, I got them off an but a big bitey on them. 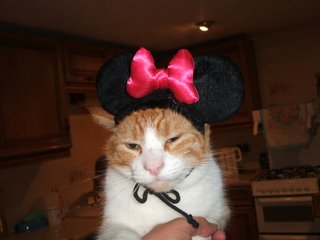 As yoo can see, no I am not amewsed. Mousies are furr hunting an if I find the one who gave his ears to mum, I will sort him out reely good!!