How to scare your mum 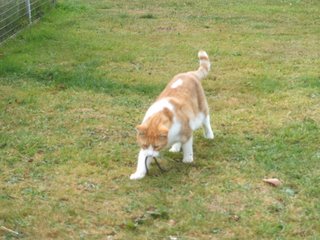 I've been hunting again an just look what I got. I cawt me a snake! 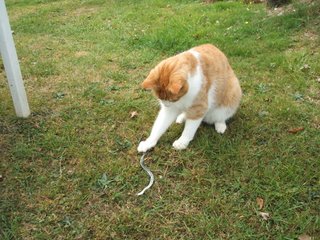 I had a good chew on it an I fink it's dead so now I'm going to play wiv it. 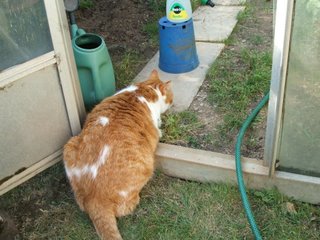 Spoilsport. Mum took it away furrom me an put it unner the plantpot so dad cud see if it wuz a poison viper.That wuz after she screeched at me an told me too drop it. Drop it woman??? Do yoo know how long it took to catch it?
Eric knows it's theer an he's gonna gard it an make shoor it duzn't ex-cape. 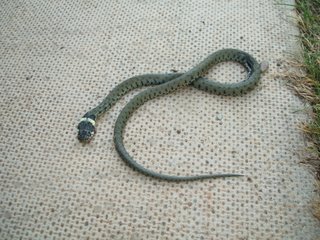 Her's a pichur of it. It wuz neerly dead furrom me putting the bitey on it. Mum got a 14lb.sledgehammer an hit it on the head to make shoor. Dad sed the slej-hammer wuz a bit ecks-sess-iff. He finks it wuz a part grone grass snake, an theer not poy-sun-uss so it wuz ok, but I had to be shut indoors an watched just in case I got pawly.I knew it wuz a armless snake cuz yoo can't see enny arms on it.

Comments:
Flynn, you are a mighty hunter but be careful, OK? Some snakes are very bad. We like the image of your mum wielding the 14 lb sledgehammer, that made us laugh a lot!
Cornish Grandma has a grass snake that swims in her pond and eats her frogs and tadpoles, she wishes he would go away.

Very impressive! Snakes do make an impressive kill, don't they? Cats are excellent for keeping local snake populations under control, though some of them eat mice and moles. Your mum should be proud of you and happy you're protecting her like that.

Bwhaaaahhaha! A sledgehammer?! See what humans need to use when all it takes is for us just to put the bitey on it.

Oh you are such a furry good hunter! I am always so impressed!

Oooh, Flynn you ARE a mighty hunter! Grandma had a kitty that caught snakes all the time- she loved it 'cuz she HATES snakes!
What a clever boy. I hope after she screeched your Mum praised you.

You ginger kitties seem to be really good at scaring your Mums. I'm glad that it wasn't a poisonous snake, though I have seen a good-sized cat attack and kill a rattlesnake without being hurt. Did Eric get to eat the snake afterwards?

A SNAKE?! I don't think I have ever seen one of those.

Way to go with the capture and the bitey - quite impressive skills!
Midnight

I think I would scare my Mom to if I ever get to catch something like that. Seems like I ever get are froggies and lizards. Mom don't seem afraid of those cause she takes them from Cleo and me and saves them. Gosh she just can't let us have any fun. Sometimes we get away with having fun when she isn't watching. Good for you Flynn, keep up the good hunting.

We've never seen a snake. You're very brave to catch it.

Oh wow. Careful with those snakes, Flynn. Some are poison, they say. But I think they taste like chicken. We laughed hard about your mom smackin the snake with that huge hammer. Beans are so funny. And obviously it was armless. Whoever saw a snake with arms anyways.
Purrrrrrrrrrs,
Boni

Wow, that is impressive. At least Bubbles only brings mice, rats and the occasional lizzard. No snakes!

Wow, you are the luckiest cat in the world. I never got to take a bita snake before. Was it tasty? I think the sledge hammer was a good idea. No sense in doing half a job when you can do the whole thing. My lady peep laughed a whole lot at your post.

You are furry brave to catch that snake! Our Uncle Rusty (he's a ginger too!) catches them sometimes and takes them home to our grandma.

Heh. My Meowmy saw that picture and got all freaked out! If I ever get outside, I'm gonna find a snake like that...

The Feline Americans and I am really impressed with your huntin' skills. You're definitely talented! But when I showed your post to Mom, she said, "Eeeeeeeeeee!" She's not much of a fan of the reptile sort. She said that a 14 lb. sledgehammer wasn't overkill. The last snake she saw got shredded by the weed whacker and got EVERYWHERE! Yum!
DaisyMae Maus