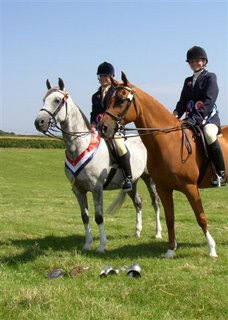 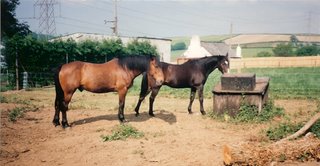 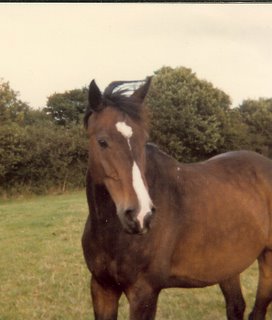 These pichers are for all you kitties who asked about mumbeans horsies. Sadly mumbeans two horsies have gone over the horsie rainbow bridge cos they gotted old. The one on his own was her most favourite ever horsie in the whole world. He was called Mr. Who, and she hadded him for 24 years. She gotted him buried in his favourite field. She got a fence put round him so the other horsies can't walk over him. We like going where his grave is, because lots of mousies live there, and the horsies can't bovver us when we are looking for them.
Sometimes when we look for mousies in the fields, we don't hear nuffin cos we are concentrating so much. Then the horsies come up behind us, and snuffle our butts. Boy!!! Does that scare us. I jump 10 feet in the air (well that's what it feels like) and all my furr stands on end.Mumbean says they are just being friendly, but I don't know bout that. The other horsie was called Harvester.
Mumbean has got other horsies living in our fields, and she looks after them furr other peeps.There are 8 here at the moment. In the other picher of the two horsies with peeps on, they belong to the lady who looks after us when our beans go on holiday. Mumbean said they go to sumfing called shows, and win lots of prizes.
Mumbean finks she has worked out how to put other kitties links on our site, (and not befurr time!!!) so we will be putting them on as soon as we can.
Flynn's been a silly boy!!!!
He wouldn't want me to tell anyone this, but guess what he did yesterday.We were out in the fields playing, then when we came in he went in his kitty litter. And do you know- he thought he was still outdoors and furrgot to squat down. HE DID IT STANDING UP!!!!!!! HE PEED ON THE WALL!!!!!!! Mumbean said FLYNN What are you doing????
He said he was effurr so sorry, but he just forgot. Mumbean said it is a good job he hasn't got any hoo haas or it would stink. I don't fink he will make that mistake again. Well that's all my mews furr now. Flynn wants to do a post, so I may let him do the next one.

Comments:
oh our mommy likes the horsie pikshurs! Grampa Norton used to pee standing up too. well, that's acause he could not squat acause he was old and stiff.

Oh Horsies are furry big. I can imagine that if they came up to you and you weren't expecting it, it would make you jump, huh?

oooh - we likes the purrty horsies but we sure don't want them ta snuffle our butts!

Uh, Flynn my man, as an American gentleman I feel it's my duty to remind you that you're a British gentleman. I understand it could happen to any of us, but do try to remember your litterbox manners!

All the horsies look nice, but we don't think we'd like it if they got too close to us!
Aw Flynn, we can see how you'd forget that just after comin' inside.

Wow, horsies. Mum says THANKS. She likes horsies too and has a furiend who does dressage.

LOL, about getting your butt snuffled. I would love to see you jump when you get surprised.

But always remember your litterbox manners.